The pros and cons of batched versus triggered emails

Every company should be investing in email marketing, the channel that has proven time and time again to offer the highest ROI.

However, in order to enjoy those kinds of returns, you need to think long and hard about the types of emails you’ll send.

One specific example is the debate between batch vs. triggered emails.

Triggered emails are emails that get sent when a certain event or behavior triggers them. Batched emails, in this case, refer to email campaigns sent out at one time to certain segments of subscribers.

So which should your company be using?

The pros and cons of batched emails

A batched email refers to a message you send to a group, or “batch," of recipients. So, if you have 1,000 email addresses, you’d want to segment that list into different groups based on traits that are relevant to your end goal as a business.

For example, if you sell accounting software for small businesses, 200 of those email addresses might be for independent contractors. Another 500 may be people who own private practices and the rest might belong to restaurant owners.

Chances are that each of those segments has different needs. By speaking to them, you improve the likelihood of selling your software. So, you could send a batch of emails to the independent contractors explaining which tax benefits they qualify for.

You might send another email to restaurant owners making sure they understand how to account for the depreciating value of their equipment. Those who own a private practice could receive one about how they need to report the money they spend on employee benefits.

Batch emails should not be “batch-and-blast,” however.

You never want to send the same email out to your entire list.

Again, segment your list, so you’re able to send messages that are as relevant as possible to each recipient.

The pros of batched emails

If you haven’t already segmented your email list and begun sending out batched emails to each group, there are two very good reasons to start doing so right away.

According to the Direct Marketing Association, 42% of companies have identified at least six segments in their markets.

As we touched on above, you can address each and every one of these segments with batched emails – something you can’t do with an email blast or triggered emails.

This also means you can measure the effectiveness of each message which, in turn, will help you learn more about each segment, so you can better market to them in the future.

For example, you might find that your private-practice clients clearly aren’t interested in emails about managing write-offs because their open rates are so low. Going forward, you’ll want to cease writing those messages, but you’ll also know to leave that topic out of your blog posts and other forms of marketing.

The Skimm shows off segmentation and personalization in this birthday newsletter:

Reacting to news and recent events

Did a newsworthy event just happen that’s relevant to your market?

Jump on the momentum of this story by sending out batched emails on the topic.

According to Instapage, email subject lines about news are among some of the best for ensuring high open rates.

The cons of batched emails

One of the main reasons the “batch-and-blast” approach ever caught on, to begin with, is because they’re so easy to create and send out.

You literally just write one message and send it to your entire list.

You can’t be very specific with your message, of course, but that’s also another reason they’re so easy to write. Instead of drilling down into relevant details, you can stick to generalities, which can be a tempting offer when you’re pressed for time.

Creating the kinds of email that will resonate with a specific type of recipient takes time. You then need to repeat the process with each segment you intend to message.

As we pointed out above, this could easily entail writing six different messages, maybe even more.

The pros and cons of triggered emails

Triggered emails are exactly what they sound like: these are emails that get sent when a certain event triggers them.

A common example of a triggered email is someone signing up for a newsletter. Once they submit their information, a “Welcome” email is generally triggered. Similarly, when you place an order with an e-commerce site, the company usually sends a confirmation email automatically.

The pros of triggered emails

If you’re not currently taking advantage of triggered emails, you’re missing out. There are at least five very good reasons to add them to your repertoire assets immediately.

The many benefits of automation

The most obvious reason to love triggered emails is automation.

Companies that leverage email marketing automation are 133% more likely to deliver messages that line up with their customers’ purchasing cycles, which lead to 18x more revenue.
Automated emails also require no time once they’re created. They can be sent around the clock, 24/7/365.

Despite the convenience of automation, triggered emails still lead to 624% more conversions than the standard batch-and-blast method.

Triggered emails respond to a specific action or trait

You can design triggered emails to respond to a whole host of different actions or traits. Signing up for an email newsletter is a very common example, but these emails can also be sent based on the profile a user has created or preferences they’ve made during their buyer’s journey.
This is helpful for creating highly-relevant emails, the kind your recipients will actually open, read, and act on.

Then, you should be utilizing lead nurturing emails. These are triggered emails that get sent out whenever a lead displays a positive behavior. This could mean anything from signing up for a webinar to simply sticking with a membership program for another year.

Here’s a great example from TOMS, a retailer that sells shoes, eyewear, handbags, and other accessories. If you join their Passport Rewards program, you’ll receive a message like the one below on the anniversary of your membership. This is a milestone-triggered email and it’s one that comes with a reward: A coupon code for your next purchase.

TOMS actually increases the discount each year, too, up to 30% after five years. Do you think this encourages people to continue their membership every year? Of course!

And the best part is that it’s a completely automated email, triggered by the date.

No one at TOMS has to put any additional work into sending out these messages.

So, if you want your recipients to continue acting a certain way, a triggered email may be the solution.

They can lead to immediate ROI.

Of all the behaviors you want to encourage, “purchasing” is probably right at the top of your list.
While you can send out batched emails to do this (e.g. announcing the release of a new product or offering a discount to one segment), only triggered emails can be used for cross-and upselling every customer who makes a purchase.

Cart abandonment emails are another example of how triggered emails can immediately improve revenues. In 2017, cart abandonment rates averaged 75.6%. Is your company seeing a similar amount? What if you could send someone an email shortly after they abandoned their cart, reminding them of it or even offering some kind of discount to seal the deal?

The cons of triggered emails

While triggered emails undeniably bring a lot to the table, they have their drawbacks, as well.

We’ve criticized “batch-and-blast” emails a couple times now and for good reason: they don’t work because they’re far too general.

Unfortunately, it can still be very tempting to create generic emails when they’re triggered off an action.

If you don’t think long and hard about what the triggering action means from the customer’s perspective, it’s easy–not necessarily inevitable, though–to send the kind of email that shows little thought on the part of your company.

Only a limited degree of personalization is possible.

That said, even the best-written triggered emails are going to fall short of the kind of personalization you can reach with a batched email.

By their very nature, triggered emails are clearly automated because of a recent event.
There’s no way around that. Given how much customers value the personal touch, this is definitely a disadvantage. It’s easy for recipients to simply pass over your message because they know it was written specifically for them.

In the end, the batch vs. triggered emails debate probably doesn’t have a single winner.
Instead, it’s best to understand the pros and cons of each, so you know when to use both types of emails.

Batched emails are the clear winners when specificity is essential. You can create a custom email from scratch for a very particular type of recipient.

On the other hand, there’s no beating triggered emails for responding to a certain behavior immediately. The right triggered emails can provide an ROI without any input required from your staff. That’s an incredible advantage.

So, instead of choosing one or the other, use both and your entire email marketing strategy will be the winner.

Kaitlin Westbrook is a content writer who covers business and creative content. When she's not writing, she enjoys movies, baking, and her Pomeranian. 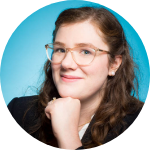