6 Testing best practices and ideas for your email marketing

Even with the best email components and the most efficient campaign execution, some email marketing efforts fall flat. Testing emails can help you figure out which parts of your marketing campaign need improvement.

Before we go further, let's review the basics. We'll talk about the different types of email testing, how to perform split testing, and how to interpret email test results.

What are the different types of email testing?

There are two main types of email testing.

Some are tests you put emails through right after crafting them (but before sending them).

Other tests can’t happen without sending emails to at least some of your subscribers. The purpose of these types of email tests is to gather data to help your current emails perform better. They also allow you to create better emails in the future.

At the very least, quality assurance testing for emails will help you avoid the worst outcomes before they have a chance to happen.

Here’s a list of email tests you can perform before executing marketing campaigns.

A very convenient way to conduct design testing is through looking at inbox previews provided by your EMS.

You can choose to perform only quality assurance checks or only variable testing, but this practice may not yield the best results. Instead, it’s much better to make space in your schedule for both. Going with your gut instead of conducting email tests will often result in more time-consuming trial and error.

One of these two tests is much more popular and widely used than the other. Let’s start with the less common one: Variations in A/B testing refers to single variables changed at a time. This is the main difference between it and its multivariate counterpart. Split testing is effective in finding out which version of a message will increase key performance indicators (KPIs).

Which email components can you change in email split testing?

As long as an element is part of the email marketing campaign you’re set to execute, you can make it an A/B testing variable. However, remember that split testing allows for only one element change at a time.

Interested in gathering data from more than one changed element? You can always run a second A/B test after you determine the best variation from the first test. 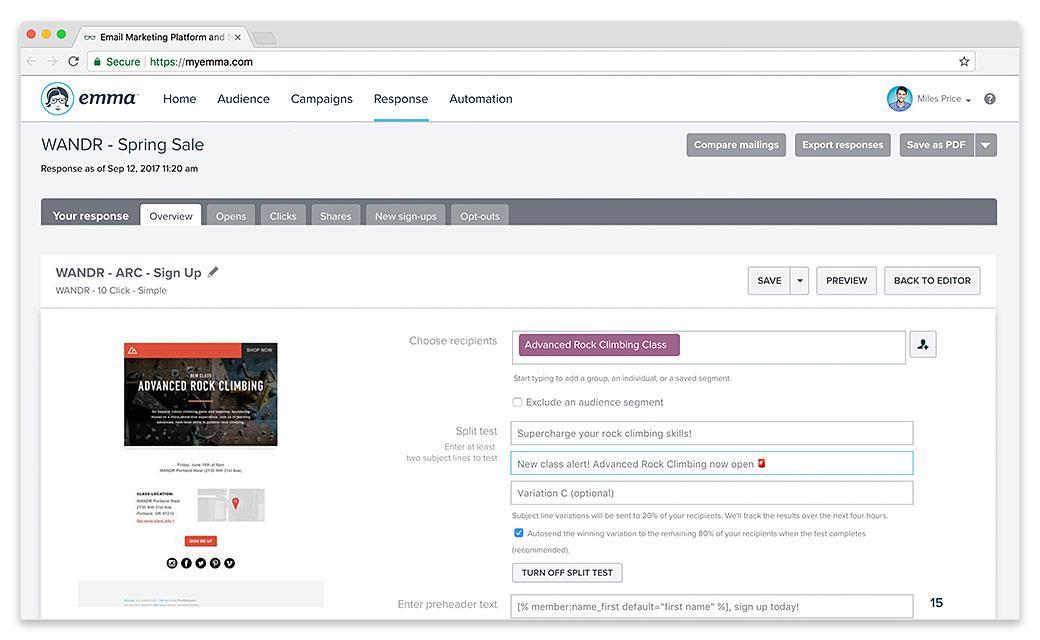 Below are some common email elements that can benefit from split testing:

How do you translate A/B testing results into actionable input?

If you work with an EMS, chances are the platform will have a way to show important data in an organized fashion. For example: Emma collects the results of multiple mailing instances in one spreadsheet, from which you can generate summaries or check detailed reports. You can see this in action below. You need to know your current metrics before conducting split tests. Take note of open rates, click-through rates, and any other stat you want to boost.

These will be the basis of your A/B testing hypothesis. Focus on one or two metrics that you want to improve, and then pick an email component to change. The latter decision should rest on careful observation and sound speculation.

Here’s an example: Your open rate has been declining over the last four email campaigns you’ve executed. You think it’s because your subject line is formulaic and safe. During split testing, you try a new approach to crafting email titles. If your open rate improves, it means your hypothesis was likely correct.

What comes next after a proven hypothesis? Applying the new approach to the mass sending of the email campaign and in crafting future campaigns, of course.

What are some email testing best practices to keep in mind?

Don’t just form a hypothesis. Identify your end goal, too.

To continue the sample situation earlier: If your typical open rate (before it started to decline) was 25%, do you aim for that or a little higher? Name the number and stick to it.

Split testing allows you to learn more about email marketing and your subscribers during the process. Its purpose is not solely to increase stats.

Run both variations of a split test at the same time. If you do another round of split testing to improve on your previous “winner,” run that test under similar conditions, too. Not doing so can lead to tests having wildly inaccurate results.

A/B testing works best if one of the variations is your original email campaign. This is your real and reliable baseline. If you want to test more than two variations, conduct separate A/B tests for each. This will make confounding variables easier to spot.

Perform email testing on the largest subset of your email list as you can. This will lessen the probability of random chance or error and increase the accuracy of your results.

You may also consider letting your test run longer. Some of your subscribers may not open their emails the moment they hit the inbox.

This doesn’t cancel out having an end goal. When you reach your goal, implement the change proven effective by testing. However, think of new hypotheses when you have a moment to spare. Running A/B tests in the background all the time with different variables changed can lead to highly optimized email campaigns months down the line.

Don’t ignore the results when they come in and don’t choose your gut over empirical data. Don’t wait until your email list evolves and your subscriber behavior and demographic changes completely before getting around to your action plan.

There are two main types of email testing you can perform: quality assurance checks and variable tests. A/B or split testing is a very helpful example of the latter.

With A/B testing, you can test a variation of one element of an email against another – preferably your original work. The test exists to prove or dispel a hypothesis about the performance of your email campaign.

Have you ever sent an email that you wish you could redo? Don’t find yourself in that situation again – use our preflight checklist for email campaigns.